Posted in: FROM THE GIRL3 comments 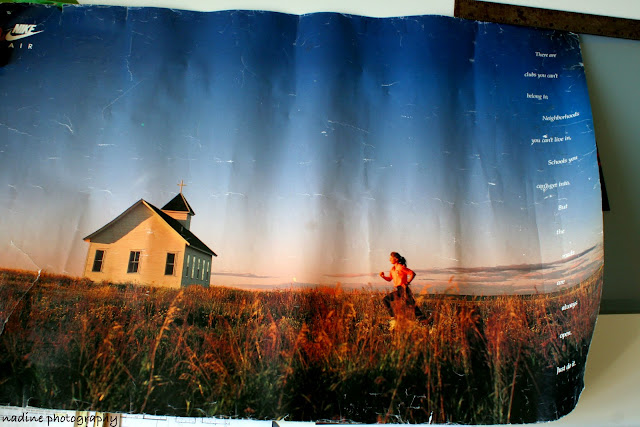 There are clubs you can’t belong to
Neighborhoods you can’t live in
Schools you can’t get in to
But the roads are always open.
Just do it.

This is a Nike poster I’ve been holding onto for years.  I took it off the wall after it had ripped and was looking rather tattered (even after taping it over and over!) … but still, have not been able to throw it away.  I got it from a flea market when I was 9 years old.  Definitely the era when I “had” to have posters up on my wall.  At that point, I thought I was going to make it to the Olympics as a 100m runner.  A-N-Y-thing, may I repeat, A-N-Y-thing to do with running … I was drawn to.  Funny, now I try to picture a 9 year old having the desire to be a runner, and cannot imagine how obsessed I must have seemed!

Now, facing realities, I find that too often I put limitations on myself for what I CAN actually do. Somewhat like what that prose talks about “…clubs you can’t belong to … schools you can’t get in to …”.  No, I will never be an Olympic short distance sprinter (surprise Sarah!), but who says I can’t run?!  And run hard as if I were?!  Even the Bible talks about giving running in our race of faith, not expecting to win, but running as if you would anyway … with your ALL!

Do you not know that in a race all the runners run, but only one gets the prize?
Run in such a way as to get the prize.
1 Corinthians 9:24

Today, I will take on the day … grabbing hold of the desires that have been placed in me.  Being obedient to that which I know God has given me a heart to do.  Why wait any longer?!

The roads are always open.